7 Best Valentine's Day Campaigns 2020: Hoping to Get Lucky (or Not) 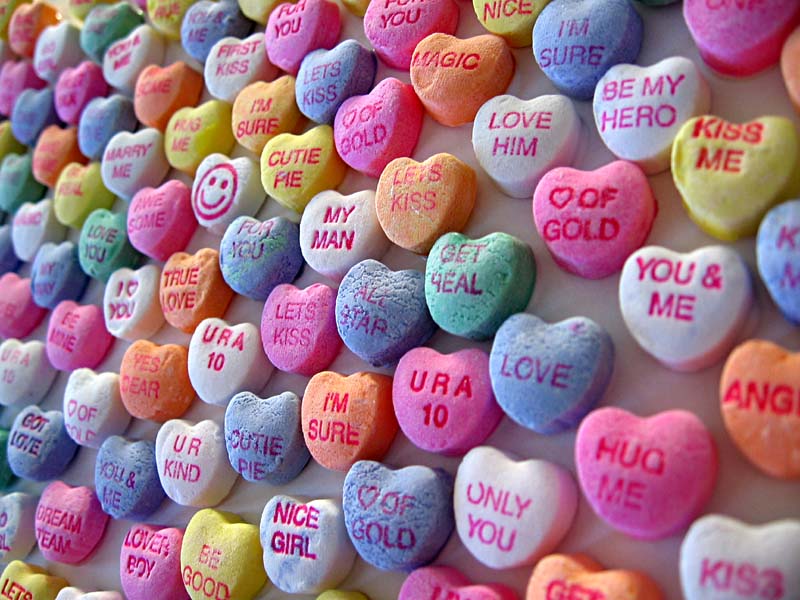 A flower delivery service is usually a shoo-in for Valentine’s Day. Just throw on some Kenny G, chill the bubbly, dim the lights, get your heart-shaped box of chocolate, then sprinkle rose petals haphazardly around the room. Boom! You’ve got a flower ad.

Teleflora took it in a very different direction and you can’t really fault them for it because it’s hilarious and reminds you of all of the useless junk you have to find a place for in your cramped apartment that’s really only appropriate one day a year.

Do you want your V-Day to be more of a U-Day? For the relationship that has run out juice or never really got off of the ground(s), Caveman Coffee is offering a way to say what you might not really know how to with, the Break-UP Box.

Equal parts funny and exhilarating, this gift could help you solve more problems than one.

The birds were chirping for this social media staple’s offline Valentine’s Day escapades. Twitter took to the streets, or rather the underground of three metropolitan cities to spread messages of love like a canary in a coal mine.

Like being “screenshotted” and sent to the group chat, Twitter posted tweets from users in subway stations throughout three cities to capture the spirit of love.

Have you been in a relationship for a while and it’s time to show your partner that you haven’t been dragging your feet? Get an ultimatum lately? Want to avoid the judging stares and snide, thinly-veiled comments of your significant other’s friends and relatives? Or are you just ready to take that big leap of faith with a special someone?

Well, Pepsi’s got the answer for you to give that special moment a little extra oomph! Pepsi resurrected an icon by giving away a lab-grown diamond engagement ring made with Crystal Pepsi.

Nothing’s better than going against the grain like a good head scratch or sanding an old wooden table. Like that terrible metaphor, BK is pushing back against the traditional Valentine’s Day narrative by piggybacking on the "Birds of Prey" release and going full Harleen Quinzel by offering restaurant-goers in select cities who bring in pictures, letters, and mementos from exes to get a free Whopper.

That’s not a bad deal. What better way to give a big middle fing*r to Valentine’s Day and everything it stands for than spending it in line at a Burger King getting rid of an effigy of someone you want to forget.

Who doesn’t love pizza? It’s one of the most versatile ingredient platforms in the food world–no disrespect to soup. How do you feel about free pizza?

Resy is mobilizing and doing a pizza pop-up! That was probably misleading because I don’t think they’ll deliver, but if you’re in New York, Chicago, or Los Angeles, shoot your shot and try to score a pizza from one of Resy’s three iconic partners: Pasquale Jones, Pizzeria Bebu, and Jon & Vinny’s.

This one’s all about the smiles. Bringing a little light into the day of a kid who’s spending their Valentine’s Day in a hospital bed is the best thing you can do. All it’ll cost you is a few minutes of your day and some kind words.

Did I mention that for every card sent $1 will be donated to CHLA? You’re practically printing money!

5 Tips To Get More Free PR For Your Business
Buzzword or Buzzworthy: Direct to Consumer (DTC, D2C) Demystified
Road to 10k Instagram Followers: Best of Hawke Media Posts
Live from the Nest Season 2 Ep. 5 w/ David Peck, Cannabis Entrepreneur
7 Best Valentine's Day Campaigns 2020: Hoping to Get Lucky (or Not)
9 Ecommerce Platforms We Love
Building Trust: Influencer Marketing
5 Absolutely Essential Points of Cash Flow Management
5 Abilities Every Chief Operating Officer (COO) Should Have
Everything You Need to Know: Marketing Agency vs. Hiring In-House
The Super Bowl Economy: Everything but Football
Live from the Nest Season 2 Ep. 4 w/ Shawn Gold, Founder & CEO, Pilgrim Soul
A Robot Walks into a Bar: Rotendr Pitches Hawke Cage
Plain and Simple: Content Marketing 101
5 Marketing Takeaways from KPop Giant BTS
Why CannaNest Is the Best Cannabiz Event in 2020
5 Great Ways to Get Press
Hawke Basel: An Evening of Fine Art & Fanfare
Hawke Turns 6: Our Strength Is Our Values
7 SEO Mistakes All Experts Make
The Importance of Testing
Episode 3: "Making the Marketer" w/ Hawke Media CEO Erik Huberman and Entrepreneur Xavier Kochhar
The Most Exciting Content of Q4 According to Hawke's Content Superstars
7 Tips to Create the Best Mobile Friendly Site
Holiday Hangover: 3 Ways to Avoid Marketing Myopia
Live from the Nest Season 2 Ep. 3 w/ Andy Mackensen, CMO & Co-Founder, SnackNation
Rewind: A Look Back at Hawke's Best Moments of 2019
7 Important Tips to Improve Your Email Open Rates
12 Days of Holiday Marketing Tips
Episode 2: "Making the Marketer" w/ Hawke Media CEO Erik Huberman & Jeffrey Nicholson, VaynerMedia
Get Creative, Gain an Audience through Instagram Stories Ads
9 Ecommerce Conferences You Can’t Miss in 2020
Introducing the First Episode of “Making the Marketer,” With theAmplify Founder Justin Rezvani
What It Means to Give Back at Hawke Media
The Secret to Success: Preparing Your E-Commerce Strategy for the Holiday Season Starts Now!
Do It For The Culture: What Makes Hawke Media’s Award-Winning Culture Better Than Anywhere Else’s
2019 Hawke Holiday Content Marketing Plan
All of the Marketing I Saw While Running the New York City Marathon
Digital Marketing Strategy: 12 Tips to Stay on Track in 2020
Q & A: Why Influencer Marketing is Perfect for the Hospitality Industry
Black Friday vs Cyber Monday 2019
5 Things Your Brand Can Do Without a Big Marketing Budget
In Case You Missed It: Here's What Was New on the Hawke Blog in November
Black Friday and Cyber Monday: Creating an Influencer Strategy
3 Content Marketing Tips for Black Friday and Cyber Monday
How to Set Up Your Socials For Black Friday/Cyber Monday Success
Last-Minute Strategies to Save Black Friday
Seasonal Versus Evergreen Content: The What, When, and Why
4 Ways to Increase Email Open Rate This Holiday Season
6 SEO Tips to Plan Your Holiday Campaign
Facebook Automation: 4 Essential Automated Rules
3 Tips to Ace Your Phone Interview With Hawke Media
4 Reasons Hawkesgiving Was a Huge Success
Digital Marketing Tips, Broken Down by Service—and Holiday—in Q4
4 UX Best Practices To Maximize Your Holiday Promo Success
Navigating Insurance as Your Company Grows: Beta Stage
In Case You Missed It: Here's What Was New on the Hawke Blog in October
Three Reasons to Avoid a Revenue-Share with Your Marketing Agency
4 Marketing Lessons to Learn from Kanye's Sunday Service
Introducing Our New Grad Program: The Associate Digital Marketer Program!
6 Takeaways from Working with Some of the Biggest CBD Brands
What to Do Before Launching Digital Ads
Why Stock Photography will Sink Your Social Brand: You Need Your Own Social Content
Facebook Messenger Marketing: 5 Conversational Ad Tips to Drive Revenue and Increase Subscribers
How to Increase B2B Sales With Email Marketing
11 Mistakes Brands Make When Hiring Digital Marketing Agencies
8-Step Instagram Grid Tutorial (with Templates)
CBD Advertising: 6 Ways to Promote Your CBD Brand
World Mental Health Day 2019: How Hawke Values Wellness in the Workplace
Seasonal Versus Evergreen Content: The What, When, and Why
First Glance: 19 Photos of Hawkefest 2019
4 Influencers Fashion Brands Should Be Paying Attention to in 2020—and Why
3 Amazon Audit Solutions to Prepare for the Holidays
How to Optimize Your Amazon Marketing Strategy
4 Tips to Make the Most Out Of Your Influencer Collaborations
In Case You Missed It: Here's What Was New on the Hawke Blog in September
Our Content Team’s Favorite Marketing Tactics They Saw in Q3
How to Place a Google Analytics Tracking Pixel
Saving the Best for Last: Hawkefest Is the Best E-Commerce Conference to Close out 2019
6 SEO Tips to Plan Your Holiday Campaign
Live from the Nest Season 2 Ep. 2 w/ Mike Banuelos VP of Strategy, Hawke Media
Why Hawke Media and Google Celebrated the Holidays in August
Email Drip Marketing Campaigns: How to Set up a Conditional Split Workflow to Increase Personalization
Facebook Advertising KPIs: 5 Key Metrics
19 Reasons Why Hawkefest is the Best Event of 2019
Instagram Influencer Marketing: 5 Best Practices to Keep Engagements Running Smoothly
Live from the Nest Season 2 Ep.1 w/ Daniel Chen Head of Media Buying, Hawke Media
Why Outsourcing Your Financial Services is a Smart Move
Adopt a Puppy from Found Animals at Hawkefest 2019
3 Best Cannabis Marketing Strategies to Elevate Your Brand
The NFL Season: 5 Ways to Coach Your Marketing Strategy to a Win
Hawkefest: What is an Anti-Conference?
Hawkefest Gives Back: Partnering with Orphaned Starfish
Vote Up for Blazing Trails: Cannabis Marketing at SXSW 2020
Helping Business Owners Understand the eCommerce Pyramid
Does a $5 Billion Fine Solve Facebook's Privacy Problems?
What Brands Need to Know About Community Management
6 Things Missing from Every Conference You've Ever Been To
Mobile Design: How to Optimize Your Site for Mobile Browsing
How MailChimp is Expanding Beyond Email: 3 New Features