A Robot Walks into a Bar: Rotendr Pitches Hawke Cage 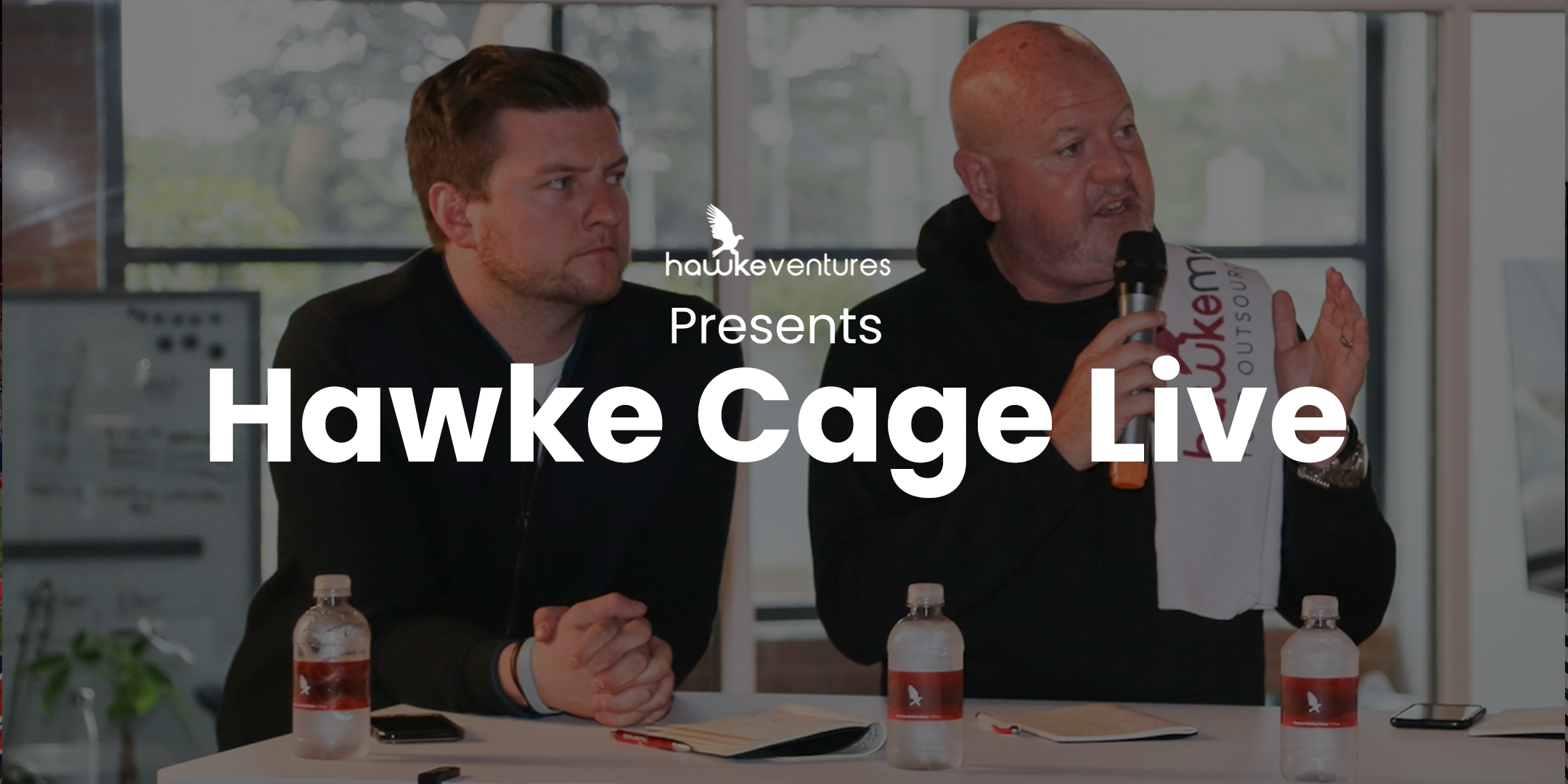 Co-Founder and CEO Ben Winston came to Hawke Media with a dream to make long lines at the bar a thing of the past. He aimed to secure an investment from Hawke Media’s startup seed fund Hawke Ventures to manufacture units of his invention, the Rotendr, a drink-serving robot vending machine designed for efficiency and scale.

Winston knew that he was just one cash infusion away from arming himself with data on his invention’s profitability, but first, he would have to get through the Hawke Cage, Hawke Media’s monthly investment pitch show featuring LA's top startups putting their best ideas to the test.

‍
Winston came up with the concept of the Rotendr while waiting 20 minutes for a vodka soda at a bar in Venice with his business partner. He hypothesized that although bartenders are skilled at creating many drinks and cocktails, over 50% of drinks served consist of just two ingredients: vodka soda, rum and coke, whiskey ginger, etc. So, if that many drinks are easy to make, why not train a robot to do it?

The Rotendr has yet to be tested at scale, but Winston believes its efficiency will be the main selling point. It pours drinks in 20 seconds or less, which could mean up to 20% more revenue for venues, a huge added value for businesses historically operating on 5% margins.

Much of the company’s profits will be generated from contracting bars and nightclubs, however, there are other interesting opportunities to generate revenue. The Rotendr takes a $1 service fee for every drink sold, and the machine is also built for branded opportunities.

“From drink sales alone, we think we can take a percent or two of the $105 billion on-premise alcohol industry in the US,” Winston said. “The fact is the Rotendr is useful at high traffic venues and events that have a lot of people. What that means for us is a lot of traction, a lot of revenue coming in, and also a lot of eyeballs. There’s a huge sponsorship and advertising play for us there that we’re really excited to unlock.”

‍
Winston’s plan was to secure capital from Hawke Ventures to manufacture five units of the Rotendr, which he would then use to test the invention’s profitability at scale and leverage the data to bring on investors that may have been gunshy originally.

However, funding was not the only reason Winston sought to secure a partnership with Hawke Media. “We need to engender use, we need to make [the Rotendr] culturally relevant, and we need to show how fun it is,” Winston said. “These are all emotional signals that a bunch of roboticists aren’t necessarily going to know how to advertise. That’s the big draw and the big value add from Hawke.”

No deal has been made between Rotendr and the fast-growing marketing consultancy, so one question remains: what is next for Rotendr? The company was recently accepted to 500 Startups & LA Fund’s Hospitality Tech Accelerator. 500 Startups is the venture firm behind companies like Credit Karma, Task Rabbit, and Twilio while LA Fund is the investment arm of the American Nightlife Association. This development will actively give approximately 38,000 bars and nightclubs access to the Rotendr to lift sales and reduce their bottom lines. Rotendr will pilot in LA, SF, and Las Vegas in March 2020 through its partnership with the ANA.

Winston exits the Hawke Cage optimistic and excited about the future. “We are automating the service and sales of alcoholic drinks,” Winston said. “This is an industry that has been around for at least 6,000 years. 2020 is the decade that we’re going to see automation in this industry really come into the fold. We’re happy to be an LA company that sits on the nexus of nightlife and live entertainment, so we hope that you guys will support us as we bring this industry into the 21st century.”

The next live taping of the Hawke Cage will kickoff Tuesday January 28 at 6 PM at Hawke Media’s headquarters in Los Angeles. We will be hearing pitches from Zenstop, a mobile micro-meditation studio changing the way people look at mindfulness and Curie, a personal care brand that creates clean, multifunctional products designed for humans in motion. Pitches will be 20 minutes each and include audience participation and investor commentary. Beer, wine, bites, and great conversation will be provided. Reserve your spot before tickets sell out.

Read All Posts By Derek Regar →