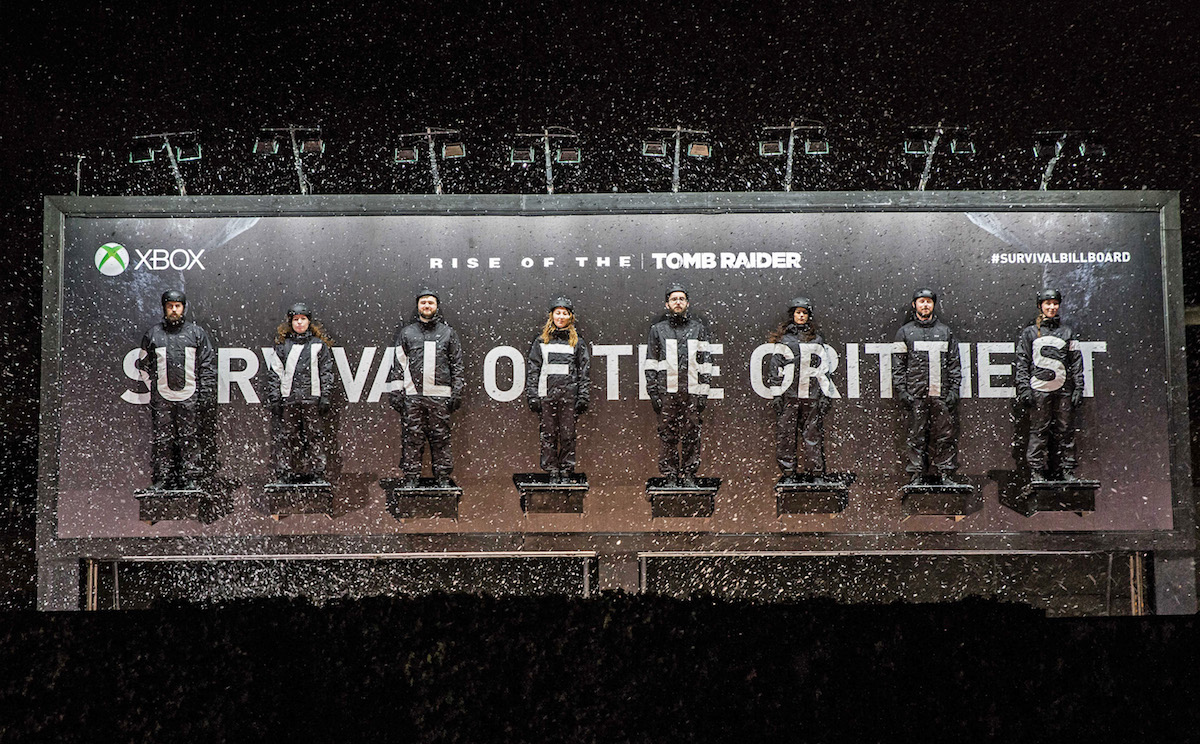 Quietly and quickly with plastic stencils in hand, a group of people set to work “tagging” the city streets with advertisements. But instead of cans of spray paint, another tool was used—a pressure washer, letting the message sit in the negative space of the freshly cleaned street.Clean graffiti is just one example of an advertising strategy called guerrilla marketing. At its heart, its aim is to reach the maximum amount of people in a surprising and impactful way. Directly grabbing the customer’s attention in an unusual way in an unexpected place will deeply embed your brand in their minds.Though smaller businesses have traditionally used guerrilla marketing as a low-cost, high-impact strategy, it has evolved into something more widespread. It’s now even used by very well-known brands at high costs, but still keeping the “guerrilla” values of unconventional ideas, high impact, and viral spread.Microsoft strapped eight fans of "Rise of the Tomb Raider" to a “survival billboard” in celebration of the November 2015 launch. The eight people were to outlast each other as other fans of the game watched live and voted what conditions to put the competitors through—which included everything from arctic cold and snowstorms to intense heat and heavy winds. The last person standing won an all-expenses-paid trip inspired by the game. The stunt gained a lot of traction and ended up winning many marketing awards.Though that is an extreme and high-budget example of guerrilla marketing, it still carries the core ideals of grabbing attention and keeping it through unusual and unexpected means. But you don’t need a high-budget to have a significant impact on your target audiences.Unicef Finland ran a campaign called “Be a Mom for a Moment” in April 2009. Abandoned strollers were left out in the cold and snow in 14 major cities of Finland with speakers set to sound like crying babies. When people looked inside the stroller, they would find a note thanking them for caring and “being a mom for a moment.” The campaign had massive traction, hitting all the major news and social media in Finland, and it is estimated that more than 80 percent of the population knew of the campaign within two days.Regardless of high budget or low budget, guerrilla marketing is a fantastic tactic to reach your audience and put your brand at the forefront of their minds—whether you take the route of quick and clean graffiti, or go the extra mile and skydive from the stratosphere.Image credit: Microsoft

Ready to take your marketing to the streets? Access our Guerrilla Marketing White Paper now!

Read All Posts By Caleb Johnson →