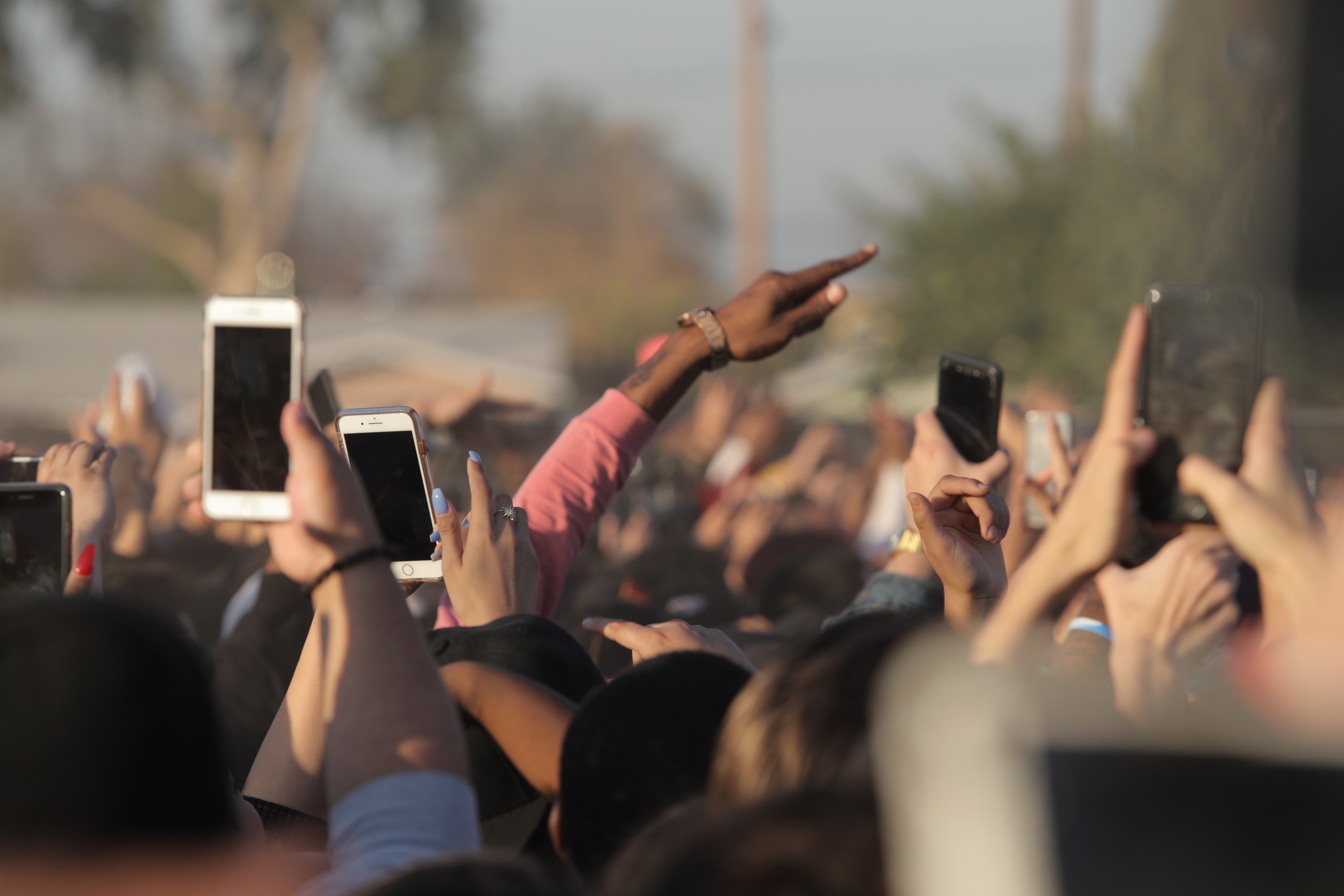 Kanye West may be unpredictable (and occasionally unhinged), but there’s no denying: he knows how to grab an audience. Kanye first made headlines around this year’s Coachella music festival when he was rumored to be a headliner, only to reportedly drop out right before the lineup announcement… only to then return to the programming for a special “Sunday Service” performance on Easter Sunday.

Unpredictable, sure, but that didn’t stop 50,000 festival-goers (almost half of the festival’s daily attendance) from attending the special event, which started before the festival at an off-site location. Nor did it keep attendees from quickly buying out the $220 ‘church clothes’ crew necks.

It makes us wonder - how has Ye been able to cultivate such a dedicated, forgiving and purchase-ready audience? It’s more than just his celebrity status and creative mastery - the fact is, Kanye (whether he knows it or not) is a marketing genius.

Here are 4 things to learn from Ye’s Sunday Service that you might use in your next marketing campaign:

Coachella continues to get bigger and bigger - not just in terms of its total attendance or the revenue it generates, but in spectacle. Each year, artists push the limits of what’s possible in live performance to make their mark on Coachella’s hallowed stages. Leave it to Kanye to create his own stage somewhere else.

Sunday Service began at 9:30am (the festival usually opens its doors around 12pm) at a hill on the campgrounds, outside of the actual festival site. And, unlike most of the programming you see on the lineup card, it only happened on Weekend 2.

Even for a festival known for its surprises, this was about as different as it gets. It made headlines and generated 27.5M impressions across social media.

Different can be dangerous - so make sure you don’t do anything that will offend anyone or alienate your target audience. But remember - brands don’t go viral by playing it safe.

Part of why Sunday Service was so heavily attended was its prohibitive factors. It only went down on Weekend 2. It happened early in the morning on the third day of a music festival (you do the math). Tickets weren’t available for sale. Viewers streaming the event at home had to watch through a peephole view.

Attendees got a first look at the Church Clothes pop-up shop, which offered various overpriced items (like the aforementioned sweatshirts and $50 socks).

There’s a phrase for this - “you only want what you can’t have.” Sometimes, making things feel unattainable is the best way to get people to want them.

Kanye hasn’t had the best press of late. Or ever. His last-minute cancellation on this year’s festival because they wouldn’t build him a giant dome for his performance definitely came across… entitled.

But while he might have disappointed those expecting to see him on the lineup card, he came back and delivered something even more special than a headlining set. He delivered an utterly unique, emotionally charged performance featuring church singers, other musical artists (Kid Cudi & DMX performed with him) and his family. He played the hits alongside new material.

The move to return to Coachella - the very festival he so recently slighted - shifted the conversation around Kanye from “petty diva” back to “creative genius” (unless you had Weekend 1 tickets).

If your brand has been tarnished in any way - even as small as something like a campaign that fell flat - sometimes it’s as simple as going back and doing it the right way to turn the momentum around.

Even after the performance, there were still a million questions. When will the new album come out? Will there be a summer tour? Is Kanye back? Will there be more Sunday Services?

When you develop brand awareness with your marketing campaigns, your potential customers will now move down the marketing funnel into the consideration stage. This is where they will explore your website and social channels or sign up for your email list to gather more information.

Unlike Kanye, when you leave them wanting more, be ready to provide more! Make sure all of your conversion and retention strategies are firmly in place so you can capitalize on the interest you generate with your awareness campaigns.

By going against the grain, creating exclusivity, taking control of the conversation and leaving everyone desperate for more, Kanye definitely won the weekend. You may not have an opportunity to utilize all of these strategies at once, but you should certainly keep them in mind for when the moment calls!

Sara is a Social Media & Influencer Manager at Hawke. When she’s not strategizing content for brands, she runs a fashion and lifestyle blog in her spare time - check out her website www.lovesarafaye.com

Read All Posts By Sara Ehlers →

5 Marketing Takeaways from KPop Giant BTS
Why CannaNest Is the Best Cannabiz Event in 2020
5 Great Ways to Get Press
Hawke Basel: An Evening of Fine Art & Fanfare
Hawke Turns 6: Our Strength Is Our Values
7 SEO Mistakes All Experts Make
The Importance of Testing
Episode 3: "Making the Marketer" w/ Hawke Media CEO Erik Huberman and Entrepreneur Xavier Kochhar
The Most Exciting Content of Q4 According to Hawke's Content Superstars
7 Tips to Create the Best Mobile Friendly Site
Holiday Hangover: 3 Ways to Avoid Marketing Myopia
Live from the Nest Season 2 Ep. 3 w/ Andy Mackensen, CMO & Co-Founder, SnackNation
Rewind: A Look Back at Hawke's Best Moments of 2019
7 Important Tips to Improve Your Email Open Rates
12 Days of Holiday Marketing Tips
Episode 2: "Making the Marketer" w/ Hawke Media CEO Erik Huberman & Jeffrey Nicholson, VaynerMedia
Get Creative, Gain an Audience through Instagram Stories Ads
9 Ecommerce Conferences You Can’t Miss in 2020
Introducing the First Episode of “Making the Marketer,” With theAmplify Founder Justin Rezvani
What It Means to Give Back at Hawke Media
The Secret to Success: Preparing Your E-Commerce Strategy for the Holiday Season Starts Now!
Do It For The Culture: What Makes Hawke Media’s Award-Winning Culture Better Than Anywhere Else’s
2019 Hawke Holiday Content Marketing Plan
All of the Marketing I Saw While Running the New York City Marathon
Digital Marketing Strategy: 12 Tips to Stay on Track in 2020
Q & A: Why Influencer Marketing is Perfect for the Hospitality Industry
Black Friday vs Cyber Monday 2019
5 Things Your Brand Can Do Without a Big Marketing Budget
In Case You Missed It: Here's What Was New on the Hawke Blog in November
Black Friday and Cyber Monday: Creating an Influencer Strategy
3 Content Marketing Tips for Black Friday and Cyber Monday
How to Set Up Your Socials For Black Friday/Cyber Monday Success
Last-Minute Strategies to Save Black Friday
Seasonal Versus Evergreen Content: The What, When, and Why
4 Ways to Increase Email Open Rate This Holiday Season
6 SEO Tips to Plan Your Holiday Campaign
Facebook Automation: 4 Essential Automated Rules
3 Tips to Ace Your Phone Interview With Hawke Media
4 Reasons Hawkesgiving Was a Huge Success
Digital Marketing Tips, Broken Down by Service—and Holiday—in Q4
4 UX Best Practices To Maximize Your Holiday Promo Success
Navigating Insurance as Your Company Grows: Beta Stage
In Case You Missed It: Here's What Was New on the Hawke Blog in October
Three Reasons to Avoid a Revenue-Share with Your Marketing Agency
4 Marketing Lessons to Learn from Kanye's Sunday Service
Introducing Our New Grad Program: The Associate Digital Marketer Program!
6 Takeaways from Working with Some of the Biggest CBD Brands
What to Do Before Launching Digital Ads
Why Stock Photography will Sink Your Social Brand: You Need Your Own Social Content
Facebook Messenger Marketing: 5 Conversational Ad Tips to Drive Revenue and Increase Subscribers
How to Increase B2B Sales With Email Marketing
11 Mistakes Brands Make When Hiring Digital Marketing Agencies
8-Step Instagram Grid Tutorial (with Templates)
CBD Advertising: 6 Ways to Promote Your CBD Brand
World Mental Health Day 2019: How Hawke Values Wellness in the Workplace
Seasonal Versus Evergreen Content: The What, When, and Why
First Glance: 19 Photos of Hawkefest 2019
4 Influencers Fashion Brands Should Be Paying Attention to in 2020—and Why
3 Amazon Audit Solutions to Prepare for the Holidays
How to Optimize Your Amazon Marketing Strategy
4 Tips to Make the Most Out Of Your Influencer Collaborations
In Case You Missed It: Here's What Was New on the Hawke Blog in September
Marketing Agency vs. Hiring In-House [Infographic]
Our Content Team’s Favorite Marketing Tactics They Saw in Q3
How to Place a Google Analytics Tracking Pixel
Saving the Best for Last: Hawkefest Is the Best E-Commerce Conference to Close out 2019
6 SEO Tips to Plan Your Holiday Campaign
Live from the Nest Season 2 Ep. 2 w/ Mike Banuelos VP of Strategy, Hawke Media
Why Hawke Media and Google Celebrated the Holidays in August
Email Drip Marketing Campaigns: How to Set up a Conditional Split Workflow to Increase Personalization
Facebook Advertising KPIs: 5 Key Metrics
19 Reasons Why Hawkefest is the Best Event of 2019
Instagram Influencer Marketing: 5 Best Practices to Keep Engagements Running Smoothly
Live from the Nest Season 2 Ep.1 w/ Daniel Chen Head of Media Buying, Hawke Media
Why Outsourcing Your Financial Services is a Smart Move
Adopt a Puppy from Found Animals at Hawkefest 2019
3 Best Cannabis Marketing Strategies to Elevate Your Brand
The NFL Season: 5 Ways to Coach Your Marketing Strategy to a Win
Hawkefest: What is an Anti-Conference?
Hawkefest Gives Back: Partnering with Orphaned Starfish
Vote Up for Blazing Trails: Cannabis Marketing at SXSW 2020
Helping Business Owners Understand the eCommerce Pyramid
Does a $5 Billion Fine Solve Facebook's Privacy Problems?
What Brands Need to Know About Community Management
6 Things Missing from Every Conference You've Ever Been To
Mobile Design: How to Optimize Your Site for Mobile Browsing
How MailChimp is Expanding Beyond Email: 3 New Features
8 Tips on How to Design a Perfect Product Detail Page
3 Reasons to Celebrate World Emoji Day
What Does SEO Stand For?
Digital Marketing Strategy 101: The Basics
Shoppable Influencer Posts
How to Create and Use Facebook Carousel Ads
Fashion Marketing: Keys to Successfully Growing Your Fashion Brand
4 Tips for Taking Advantage of Amazon Prime Day
How to Create a Complete 4th of July Ecommerce Funnel
Awareness Campaigns: Expanding the Paid Media Sandbox
Highlights from the First Half of 2019
How Marketing Agencies & Consultancies Identify Trends
Thinking Beyond Blogs: 3 Additional Formats to Use in Your Content Marketing Strategy