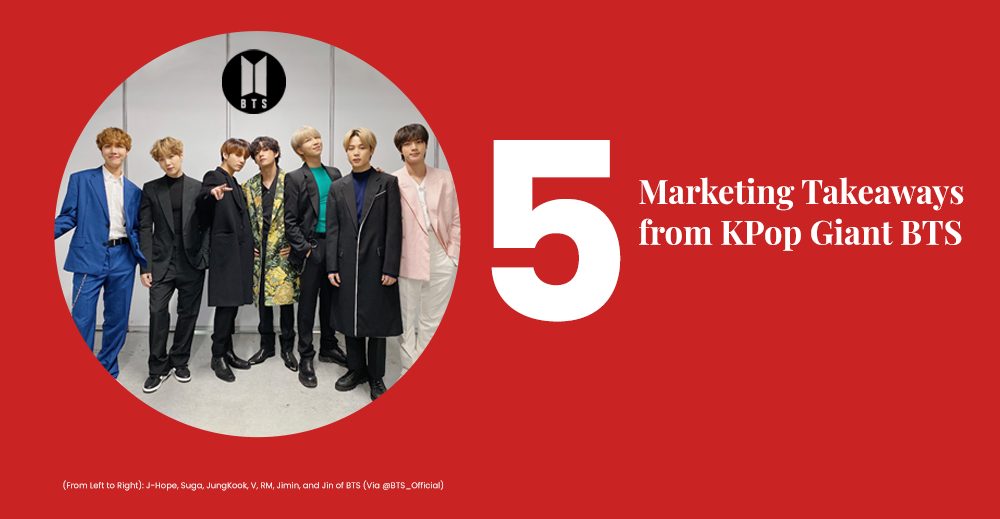 If you’re not already familiar with K-Pop, the unique branch of music and media coming out of South Korea, you’re at least a decade behind. And if the word “K-Pop” rings a bell, but BTS doesn’t, you’re set back a couple years there, too. The 7-member boy group debuted in 2013, and has since taken the world by storm–amassing a huge, self-organizing fanbase and raking in cash as they go. But why should you care?

‍
If we look at BTS as a brand, it checks many of the “success boxes” that business owners hope for when in the growth-stage:

The group’s success can be attributed to a complex group of factors, but there are a few key marketing takeaways we can glean from what BTS and BigHit (the group’s label company) are doing to stand out and keep their numbers rising.

Over the years, BTS has been engaging with different media and strategic partners to express their message, whether that be collaborations with food & beverage companies or cosmetics, to their BT21 character collaboration with the giant LINE Friends. The group’s most recent work has been with the MN Dance Company and different artists to promote their current comeback.

These collaborations have put the names and faces of BTS into markets where K-Pop may not be recognized or expected, and the contrast has pulled in new, curious listeners (who are likely to convert to sales).

2. There is no such thing as a “slow” season

Many products may have a hard time keeping their name relevant in-between big seasonal sales and/or while new products are under R&D.

Clearly content is key in this time, and BTS makes the time before a new album’s release an entire multi-month “comeback season” filled with small-scale releases of teasers, conceptual art, and singles. BigHit announced the group’s newest comeback with a release “map” that kept fans guessing on the new concept of the album, but with a lot to keep the group relevant before media appearances gearing up alongside the full album release (set for this February).

If there is one thing that distinguishes BTS from other K-Pop groups (even ones with longer tenure), it’s the fanbase. The loyal BTS “ARMY” is the definition of evangelist status. With millions of fans around the world, the Army engages with BTS’ content and merchandise, and is especially skilled at self-organizing to bring awareness to the group via various events and social media trends.

These fans have connected to the messages BTS is trying to spread, and they have felt empowered by the group to express themselves and support various causes in the name of the group and/or different members. These can include fund-raisers, tree-planting, clean-up events, member birthday meetups, volunteer translating, and more.

As part of the Army myself, I have seen fans come together to raise money to buy albums for fans who can’t afford them, recycle together, and come together during concerts to purchase and distribute thousands of glow sticks.

In concert with brand partnerships and forays into unique markets, BTS also relies heavily on experiential activations (many that they themselves do not attend) outside of their tours. In 2019, multiple activations appeared world-wide for BTS, including a multi-city gallery curated with polaroids, costumes, and art created by the members since their debut, and a pop-up called “House of BTS” that explored the different eras of the group through different rooms in a house, ending with limited-edition merch available for purchase.

Exclusive content and being able to experience the group’s curated “world” through all senses creates intimacy between fans and the BTS brand. These types of connections propel fans into higher engagement, organic social growth, and more revenue.

5. Your Customers are More Dynamic than You Think

Building a persona for your target customer is key when developing your product and targeting ads. For lifestyle brands especially, this persona becomes the core of everything you do. But what could you be missing?

BTS has done a great job learning about what matters to their fans and adapting as they (both) grow. Most K-Pop fans get the one-and-done of being screaming, female pre-teens, and people who can be easily appeased by a catchy beat and baby-pink merchandise. Not in this case.

When your following pushes through the thousands and goes into the multi-millions, it is hard to keep up that growth with a narrow notion of your following. These are real, human beings you are selling to. They have everyday problems and struggles. They aren’t always going to want what you are trying to sell. But if you can make a connection on a deeper level, validate their uniqueness and then market to that, you’ve got something.

BigHit has placed a high value on Corporate Social Responsibility, and BTS became the poster boys of a campaign to end violence and improve mental health with Unicef (the #LoveMyself campaign), resulting in widespread talks about mental health and self-harm within the Army community.

Individual members of the group also spend at least a handful of hours a week engaging with fans on the artist/fan social network Weverse, by responding to posts, talking about their day-to-day experiences, and live-streaming through V-Live similar to how YouTube influencers will do a “get ready with me chit-chat” or the like. They’re building social connections with fans that are validating the everyday struggles of being while discussing their music, new events, etc.

Remember that first and foremost, BTS is a 7-member South Korean music group. In essence, that’s what they do: perform and make music. However, they have built such a strong brand ecosystem for themselves, making it so that they are seen as so much more. In 2020 we will see the group continue to grow its fan base and revenue, while continuing to have an actual impact on the wellbeing of their “customers.” #Goals.

Read All Posts By Lauren Makielski →

5 Tips To Get More Free PR For Your Business
Buzzword or Buzzworthy: Direct to Consumer (DTC, D2C) Demystified
Road to 10k Instagram Followers: Best of Hawke Media Posts
Live from the Nest Season 2 Ep. 5 w/ David Peck, Cannabis Entrepreneur
7 Best Valentine's Day Campaigns 2020: Hoping to Get Lucky (or Not)
9 Ecommerce Platforms We Love
Building Trust: Influencer Marketing
5 Absolutely Essential Points of Cash Flow Management
5 Abilities Every Chief Operating Officer (COO) Should Have
Everything You Need to Know: Marketing Agency vs. Hiring In-House
The Super Bowl Economy: Everything but Football
Live from the Nest Season 2 Ep. 4 w/ Shawn Gold, Founder & CEO, Pilgrim Soul
A Robot Walks into a Bar: Rotendr Pitches Hawke Cage
Plain and Simple: Content Marketing 101
5 Marketing Takeaways from KPop Giant BTS
Why CannaNest Is the Best Cannabiz Event in 2020
5 Great Ways to Get Press
Hawke Basel: An Evening of Fine Art & Fanfare
Hawke Turns 6: Our Strength Is Our Values
7 SEO Mistakes All Experts Make
The Importance of Testing
Episode 3: "Making the Marketer" w/ Hawke Media CEO Erik Huberman and Entrepreneur Xavier Kochhar
The Most Exciting Content of Q4 According to Hawke's Content Superstars
7 Tips to Create the Best Mobile Friendly Site
Holiday Hangover: 3 Ways to Avoid Marketing Myopia
Live from the Nest Season 2 Ep. 3 w/ Andy Mackensen, CMO & Co-Founder, SnackNation
Rewind: A Look Back at Hawke's Best Moments of 2019
7 Important Tips to Improve Your Email Open Rates
12 Days of Holiday Marketing Tips
Episode 2: "Making the Marketer" w/ Hawke Media CEO Erik Huberman & Jeffrey Nicholson, VaynerMedia
Get Creative, Gain an Audience through Instagram Stories Ads
9 Ecommerce Conferences You Can’t Miss in 2020
Introducing the First Episode of “Making the Marketer,” With theAmplify Founder Justin Rezvani
What It Means to Give Back at Hawke Media
The Secret to Success: Preparing Your E-Commerce Strategy for the Holiday Season Starts Now!
Do It For The Culture: What Makes Hawke Media’s Award-Winning Culture Better Than Anywhere Else’s
2019 Hawke Holiday Content Marketing Plan
All of the Marketing I Saw While Running the New York City Marathon
Digital Marketing Strategy: 12 Tips to Stay on Track in 2020
Q & A: Why Influencer Marketing is Perfect for the Hospitality Industry
Black Friday vs Cyber Monday 2019
5 Things Your Brand Can Do Without a Big Marketing Budget
In Case You Missed It: Here's What Was New on the Hawke Blog in November
Black Friday and Cyber Monday: Creating an Influencer Strategy
3 Content Marketing Tips for Black Friday and Cyber Monday
How to Set Up Your Socials For Black Friday/Cyber Monday Success
Last-Minute Strategies to Save Black Friday
Seasonal Versus Evergreen Content: The What, When, and Why
4 Ways to Increase Email Open Rate This Holiday Season
6 SEO Tips to Plan Your Holiday Campaign
Facebook Automation: 4 Essential Automated Rules
3 Tips to Ace Your Phone Interview With Hawke Media
4 Reasons Hawkesgiving Was a Huge Success
Digital Marketing Tips, Broken Down by Service—and Holiday—in Q4
4 UX Best Practices To Maximize Your Holiday Promo Success
Navigating Insurance as Your Company Grows: Beta Stage
In Case You Missed It: Here's What Was New on the Hawke Blog in October
Three Reasons to Avoid a Revenue-Share with Your Marketing Agency
4 Marketing Lessons to Learn from Kanye's Sunday Service
Introducing Our New Grad Program: The Associate Digital Marketer Program!
6 Takeaways from Working with Some of the Biggest CBD Brands
What to Do Before Launching Digital Ads
Why Stock Photography will Sink Your Social Brand: You Need Your Own Social Content
Facebook Messenger Marketing: 5 Conversational Ad Tips to Drive Revenue and Increase Subscribers
How to Increase B2B Sales With Email Marketing
11 Mistakes Brands Make When Hiring Digital Marketing Agencies
8-Step Instagram Grid Tutorial (with Templates)
CBD Advertising: 6 Ways to Promote Your CBD Brand
World Mental Health Day 2019: How Hawke Values Wellness in the Workplace
Seasonal Versus Evergreen Content: The What, When, and Why
First Glance: 19 Photos of Hawkefest 2019
4 Influencers Fashion Brands Should Be Paying Attention to in 2020—and Why
3 Amazon Audit Solutions to Prepare for the Holidays
How to Optimize Your Amazon Marketing Strategy
4 Tips to Make the Most Out Of Your Influencer Collaborations
In Case You Missed It: Here's What Was New on the Hawke Blog in September
Our Content Team’s Favorite Marketing Tactics They Saw in Q3
How to Place a Google Analytics Tracking Pixel
Saving the Best for Last: Hawkefest Is the Best E-Commerce Conference to Close out 2019
6 SEO Tips to Plan Your Holiday Campaign
Live from the Nest Season 2 Ep. 2 w/ Mike Banuelos VP of Strategy, Hawke Media
Why Hawke Media and Google Celebrated the Holidays in August
Email Drip Marketing Campaigns: How to Set up a Conditional Split Workflow to Increase Personalization
Facebook Advertising KPIs: 5 Key Metrics
19 Reasons Why Hawkefest is the Best Event of 2019
Instagram Influencer Marketing: 5 Best Practices to Keep Engagements Running Smoothly
Live from the Nest Season 2 Ep.1 w/ Daniel Chen Head of Media Buying, Hawke Media
Why Outsourcing Your Financial Services is a Smart Move
Adopt a Puppy from Found Animals at Hawkefest 2019
3 Best Cannabis Marketing Strategies to Elevate Your Brand
The NFL Season: 5 Ways to Coach Your Marketing Strategy to a Win
Hawkefest: What is an Anti-Conference?
Hawkefest Gives Back: Partnering with Orphaned Starfish
Vote Up for Blazing Trails: Cannabis Marketing at SXSW 2020
Helping Business Owners Understand the eCommerce Pyramid
Does a $5 Billion Fine Solve Facebook's Privacy Problems?
What Brands Need to Know About Community Management
6 Things Missing from Every Conference You've Ever Been To
Mobile Design: How to Optimize Your Site for Mobile Browsing
How MailChimp is Expanding Beyond Email: 3 New Features