Word-of-Mouth Marketing: 5 Tips to Get Your Snowball Rolling 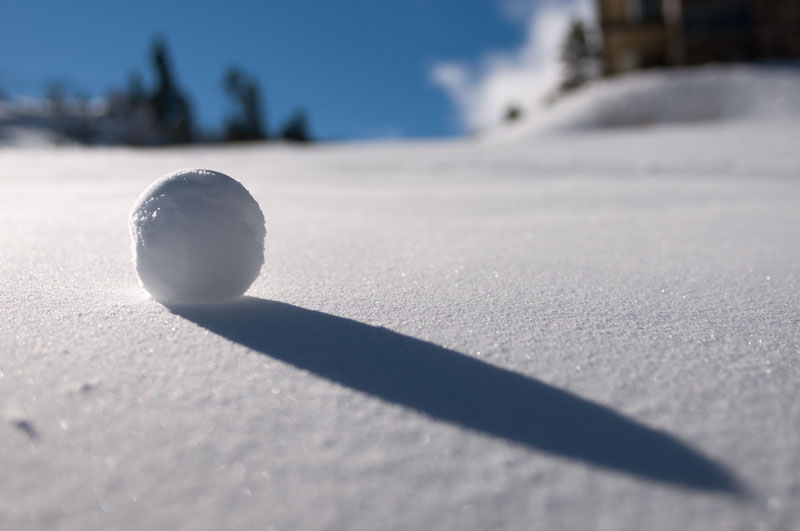 Have you ever rolled a giant snowball? You know, the kind you use as the base of a snowman? If the snow isn’t just right, sometimes you can’t even get it started. But when the conditions are perfect, you can roll one so big that it picks up everything in its path.

That’s how word-of-mouth marketing works. The toughest part is to get people talking at all. But once the conversation around your brand hits critical mass, consumers will basically do your marketing for you. Here’s how to get the ball rolling:

The late Steve Jobs was a master of word-of-mouth (WOM) marketing. But while Forbes contributor Panos Mourdoukoutas is right that Jobs fueled WOM with unique products, effective audience targeting and art-technology alignment, he forgot a critical component to Jobs’s WOM success: simplicity. Jobs made it as easy as possible for consumers to talk about Apple products.

iMac. iPad. iPhone. Not only do Apple’s most popular products have one-word names, but they all belong to the same naming scheme. It’s immediately obvious to the listener which company is responsible when they hear one of those words. Even Apple’s slogan — “Think Different” — is just two words. Consider how much clunkier the familiar idiom “Think Outside the Box” sounds in comparison. Jobs knew that the words of the word-of-mouth strategy have to fit organically into everyday conversation.

Before the ice bucket challenge in 2014, many of us had never heard of the ALS Association. What elevated the nonprofit’s profile was that it challenged social media users to do something that had nothing to do with ALS or charity. Instead of asking for donations, they asked people to pour a bucket of icy water onto their heads. Over an eight-week period, the campaign raised $115 million.

Why are competitions such an effective way to get the word out? Blame the bandwagon effect - the psychological pressure that leads people to do something predominantly because others are doing it. The bandwagon effect is so powerful that simply seeing polls indicating how others might vote can cause voters to change their choices.

Another way to leverage the bandwagon effect is to bring influencers into your marketing mix. Consider the boost Christine Andrew — a 30-something blogger with all of a million Instagram followers — gave to Nordstrom’s annual anniversary sale. Neither she nor Nordstrom would reveal more specific figures, but Andrew reportedly drove hundreds of thousands of dollars in sales to Nordstrom’s website in less than two weeks.

Andrew’s impact is no anomaly, according to TotalSocial’s Engagement Lab. The social data tool put Nordstrom in third place, behind only Amazon and Nike, among retail and apparel brands in terms of on- and offline conversations. What’s more, Nordstrom posted the highest online conversation score and ranked as the only company with a stronger online than offline score.

Even if you dislike ads, you can’t help but be pulled in by Chipotle’s “The Scarecrow.” The cinema-quality short features a scarecrow factory worker living in a dystopian world. One day, the scarecrow decides he’s fed up, abandons the factory, and starts his own fresh food operation. Although the short’s subject matter aligns with Chipotle’s brand, the association isn’t obvious until the last scene, which shows the fast-casual restaurant’s logo.

In less than two weeks, Chipotle’s story-driven short generated 6.5 million YouTube views. A related app quickly claimed the top spot in the App Store’s free category. Notably, Chipotle’s campaign involved no paid media during the first four weeks. Because Chipotle focused on the story first, it got social media users talking far more effectively than if it had spent the funds on Facebook ads.

Patagonia is unusual in its space for multiple reasons, but a big one is that it’s taken a hard line against traditional marketing tools like TV, radio, and print ads. And yet so many of us are familiar with the outdoor apparel brand, thanks, in large part, to the buzz it has generated for itself through corporate social responsibility initiatives.

When a brand only pays lip service to a cause, consumers can tell. Unlike many brands, Patagonia doesn’t shy away from actions that could upset its partners. Recently, for instance, it announced it will refuse to sell products to some corporate clients it considers to be bad environmental actors. Because it’s willing to take a stand, Patagonia has managed to build a multi-million dollar brand on WOM and customer loyalty alone.

Word-of-mouth might sound like a poor replacement for a multi-channel ad campaign, but it’s more powerful than you think. Once you get the ball rolling, your costs are next to zero. And as it picks up speed, you can count on it to smash through almost anything standing in your brand’s way.

Need help with your marketing strategy? Hit us up. We're ready to chat.

Erik Huberman is the founder and CEO of Hawke Media, and a digital marketing thought leader. Erik has earned prestigious honors and awards, including Forbes “30 Under 30”, Inc. Magazine’s “Top 25 Marketing Influencers”, and Influencive’s “Top Influencive Influencers of 2017”.

Read All Posts By Erik Huberman →

Live from the Nest Season 2 Ep. 4 w/ Shawn Gold, Founder & CEO, Pilgrim Soul
A Robot Walks into a Bar: Rotendr Pitches Hawke Cage
Plain and Simple: Content Marketing 101
5 Marketing Takeaways from KPop Giant BTS
Why CannaNest Is the Best Cannabiz Event in 2020
5 Great Ways to Get Press
Hawke Basel: An Evening of Fine Art & Fanfare
Hawke Turns 6: Our Strength Is Our Values
7 SEO Mistakes All Experts Make
The Importance of Testing
Episode 3: "Making the Marketer" w/ Hawke Media CEO Erik Huberman and Entrepreneur Xavier Kochhar
The Most Exciting Content of Q4 According to Hawke's Content Superstars
7 Tips to Create the Best Mobile Friendly Site
Holiday Hangover: 3 Ways to Avoid Marketing Myopia
Live from the Nest Season 2 Ep. 3 w/ Andy Mackensen, CMO & Co-Founder, SnackNation
Rewind: A Look Back at Hawke's Best Moments of 2019
7 Important Tips to Improve Your Email Open Rates
12 Days of Holiday Marketing Tips
Episode 2: "Making the Marketer" w/ Hawke Media CEO Erik Huberman & Jeffrey Nicholson, VaynerMedia
Get Creative, Gain an Audience through Instagram Stories Ads
9 Ecommerce Conferences You Can’t Miss in 2020
Introducing the First Episode of “Making the Marketer,” With theAmplify Founder Justin Rezvani
What It Means to Give Back at Hawke Media
The Secret to Success: Preparing Your E-Commerce Strategy for the Holiday Season Starts Now!
Do It For The Culture: What Makes Hawke Media’s Award-Winning Culture Better Than Anywhere Else’s
2019 Hawke Holiday Content Marketing Plan
All of the Marketing I Saw While Running the New York City Marathon
Digital Marketing Strategy: 12 Tips to Stay on Track in 2020
Q & A: Why Influencer Marketing is Perfect for the Hospitality Industry
Black Friday vs Cyber Monday 2019
5 Things Your Brand Can Do Without a Big Marketing Budget
In Case You Missed It: Here's What Was New on the Hawke Blog in November
Black Friday and Cyber Monday: Creating an Influencer Strategy
3 Content Marketing Tips for Black Friday and Cyber Monday
How to Set Up Your Socials For Black Friday/Cyber Monday Success
Last-Minute Strategies to Save Black Friday
Seasonal Versus Evergreen Content: The What, When, and Why
4 Ways to Increase Email Open Rate This Holiday Season
6 SEO Tips to Plan Your Holiday Campaign
Facebook Automation: 4 Essential Automated Rules
3 Tips to Ace Your Phone Interview With Hawke Media
4 Reasons Hawkesgiving Was a Huge Success
Digital Marketing Tips, Broken Down by Service—and Holiday—in Q4
4 UX Best Practices To Maximize Your Holiday Promo Success
Navigating Insurance as Your Company Grows: Beta Stage
In Case You Missed It: Here's What Was New on the Hawke Blog in October
Three Reasons to Avoid a Revenue-Share with Your Marketing Agency
4 Marketing Lessons to Learn from Kanye's Sunday Service
Introducing Our New Grad Program: The Associate Digital Marketer Program!
6 Takeaways from Working with Some of the Biggest CBD Brands
What to Do Before Launching Digital Ads
Why Stock Photography will Sink Your Social Brand: You Need Your Own Social Content
Facebook Messenger Marketing: 5 Conversational Ad Tips to Drive Revenue and Increase Subscribers
How to Increase B2B Sales With Email Marketing
11 Mistakes Brands Make When Hiring Digital Marketing Agencies
8-Step Instagram Grid Tutorial (with Templates)
CBD Advertising: 6 Ways to Promote Your CBD Brand
World Mental Health Day 2019: How Hawke Values Wellness in the Workplace
Seasonal Versus Evergreen Content: The What, When, and Why
First Glance: 19 Photos of Hawkefest 2019
4 Influencers Fashion Brands Should Be Paying Attention to in 2020—and Why
3 Amazon Audit Solutions to Prepare for the Holidays
How to Optimize Your Amazon Marketing Strategy
4 Tips to Make the Most Out Of Your Influencer Collaborations
In Case You Missed It: Here's What Was New on the Hawke Blog in September
Marketing Agency vs. Hiring In-House [Infographic]
Our Content Team’s Favorite Marketing Tactics They Saw in Q3
How to Place a Google Analytics Tracking Pixel
Saving the Best for Last: Hawkefest Is the Best E-Commerce Conference to Close out 2019
6 SEO Tips to Plan Your Holiday Campaign
Live from the Nest Season 2 Ep. 2 w/ Mike Banuelos VP of Strategy, Hawke Media
Why Hawke Media and Google Celebrated the Holidays in August
Email Drip Marketing Campaigns: How to Set up a Conditional Split Workflow to Increase Personalization
Facebook Advertising KPIs: 5 Key Metrics
19 Reasons Why Hawkefest is the Best Event of 2019
Instagram Influencer Marketing: 5 Best Practices to Keep Engagements Running Smoothly
Live from the Nest Season 2 Ep.1 w/ Daniel Chen Head of Media Buying, Hawke Media
Why Outsourcing Your Financial Services is a Smart Move
Adopt a Puppy from Found Animals at Hawkefest 2019
3 Best Cannabis Marketing Strategies to Elevate Your Brand
The NFL Season: 5 Ways to Coach Your Marketing Strategy to a Win
Hawkefest: What is an Anti-Conference?
Hawkefest Gives Back: Partnering with Orphaned Starfish
Vote Up for Blazing Trails: Cannabis Marketing at SXSW 2020
Helping Business Owners Understand the eCommerce Pyramid
Does a $5 Billion Fine Solve Facebook's Privacy Problems?
What Brands Need to Know About Community Management
6 Things Missing from Every Conference You've Ever Been To
Mobile Design: How to Optimize Your Site for Mobile Browsing
How MailChimp is Expanding Beyond Email: 3 New Features
8 Tips on How to Design a Perfect Product Detail Page
3 Reasons to Celebrate World Emoji Day
What Does SEO Stand For?
Digital Marketing Strategy 101: The Basics
Shoppable Influencer Posts
How to Create and Use Facebook Carousel Ads
Fashion Marketing: Keys to Successfully Growing Your Fashion Brand
4 Tips for Taking Advantage of Amazon Prime Day
How to Create a Complete 4th of July Ecommerce Funnel
Awareness Campaigns: Expanding the Paid Media Sandbox